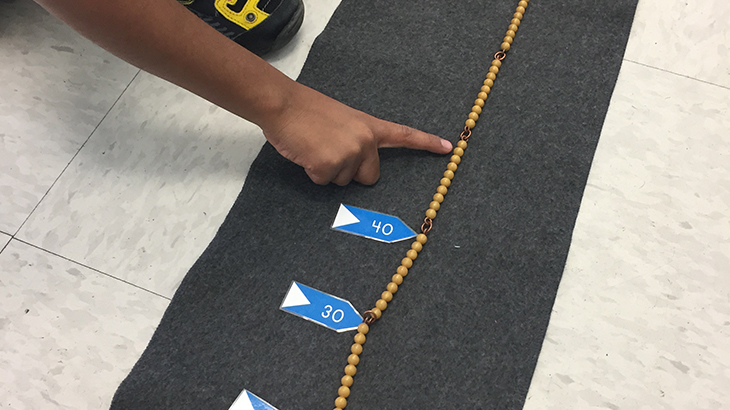 In many traditional classrooms, a teacher or assistant may take a disruptive or unruly child aside from the group and put them in a “time out.” Sometimes, that child is required to sit on a chair, or at a desk, facing away from the group, and is encouraged to “think about what you’ve done.” There are a thousand and one variations on the method, yet they all reduce to the same basic concept, that of being removed from participation for behaving badly.

The problems that arise from a “time out” are essentially the same that arise from any punitive method. In simplest terms, the child may very well learn to “behave,” yet that behaviour is tied to avoidance of a punishment, whether or not they have internalized the why of their behaviour. For those that are familiar with psychology terms, this is known as “operant conditioning.”

Time outs and punishments are, by definition, not effective in a Montessori classroom. This is not because they are disciplinary acts, but because they focus on the behaviour and not the internal development needed to prevent misbehaviour in the future. Punishments also do not work as they do not allow the child to either develop an appreciation of the power of choice, nor do they help teach alternative, acceptable behaviours.

By putting the onus of discipline on the authority figure (the teacher or guide) instead on the self, creative problem solving and conflict resolution techniques are not encouraged. In many ways, the time out method can perhaps be the most damaging of all disciplinary actions, as not only does it stagnate the development of healthy resolution techniques as described above, it can engender feelings of rejection and isolation. If a child is already experiencing feelings of low self esteem, the time out method can compound those feelings.

In the Montessori classroom, there are no such things as time outs. In fact, unless in extreme situations, there are generally no punishments. Instead, a child displaying inappropriate behaviour is stopped, the behavior is discussed as to why it is inappropriate, and the child is them immediately placed back into the situation to practice and learn appropriate behaviour. As once a child understands that instead of being punished, they are being encouraged to find new ways of accomplishing their desired goal, they will begin to internalize methods to determine acceptable behaviours in a variety of situations.

The most important aspect of this non-punitive method is that instead of trying to change the child’s behaviour from a position of authority, the child is the center of the behaviour resolution. By choosing a different strategy, a different way of thinking, the child will learn conflict resolution, problem solving, and will learn to collaborate and cooperate, instead of feeling controlled and directed by external authority.

It should be noted that Montessori classrooms will also attempt to use rewards for good behaviour. If the expectation of a reward is engendered into a child for behaving a certain way, when they are removed from a situation where behaviour is rewarded to a situation where behaviour is expected without reward, there will be lack of external stimuli to drive the behaviour. Basically, rewarding good behaviour does not guarantee that the behaviour will occur, once the reward is removed. That is why the Montessori method focuses on personal responsibility, which ultimately lead to self-discipline. Instead of resisting control or expecting reward, the child is self-empowered and develops a much stronger sense of self, one of the core tenets of the Montessori method.

Although more difficult, this can be applied at home as well. Rather than punishments, or rewards, focusing on personal responsibility allows the child to develop a sense of self discipline that serves them well in their teenage and adult years.