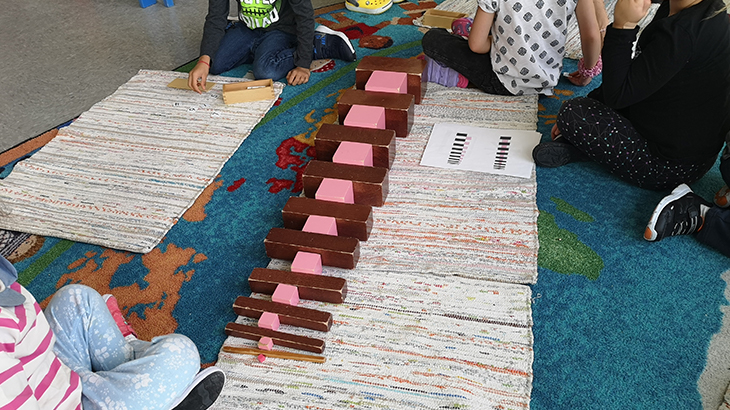 Bullying has become a subject of much discussion regarding schools in the modern age. While a few examples have made national headlines, it is unfortunately a far more common occurrence than many want to admit. It would be unjust to suggest that Montessori classrooms are bully free, yet the way that the Montessori classroom deals with bullying, is unique among all the school systems available to today’s children.

The first order of identifying and correcting bullying behavior is to define it. What does bullying look like? At what age can it begin? The argument can be, and has been, made that bullying behavior can be discerned as young as three years old. It is roughly at that point that a child will transition from natural self-absorption and self-interest to exploring and interacting with the wider world as a whole, which includes other children. The counterpoint is that at such a young age, it is difficult for a child to put themselves into an empathetic position and understand the feelings of others in response to their actions.

Typically, preschool aged children do not have the filters and life experiences that older children and teenagers have, to dissect interaction and understand the intent behind such interaction. As such, a preschooler desiring a friendship with another child may bluntly order that other child around, regardless of the emotional impact of their interaction, which may be that the other child feels emotionally subjugated. An example is a child ordering another child to play with them on the see-saw in the playground, which the dominant child may only see as a friendly interaction and may even explain the behavior as two friends playing together because “that is what friends do.”

Montessori deals with bullying by including both the aggressor and victim of bullying in all resolution from the outset. The initial discussion includes the explanation, and Montessori anti-bullying mantra, “you can’t have your fun by making others sad.” Montessori teachers will also work with both children to discuss, analyze, and resolve the issue that caused the bullying behavior in the first place, often in a three way discussion between aggressor, victim, and mediator (the teacher). The importance of this is twofold: first, by including both the aggressor and victim in the same discussion, there is no illusion of favoritism, as the victim can hear what is being discussed with the aggressor at the same time the aggressor does and vice versa; secondly, this interaction helps the victim to stand up for himself or herself, and the aggressor learns to listen, make amends, and bring the situation to a positive resolution.

While Montessori teachers and guides in the classroom do their utmost to watch for bullying behavior, sometimes a child, especially in the first few years of schooling, will feel that they can only share their deepest feelings at home. As Montessori includes the entire family, the importance of parents discussing any issues with Montessori teachers and guides cannot be understated. Most importantly, it allows for the initial discussion to occur with both aggressor and child. As well, it allows for discussions between family members to reinforce that it is never ok to feel bullied, or to bully others.