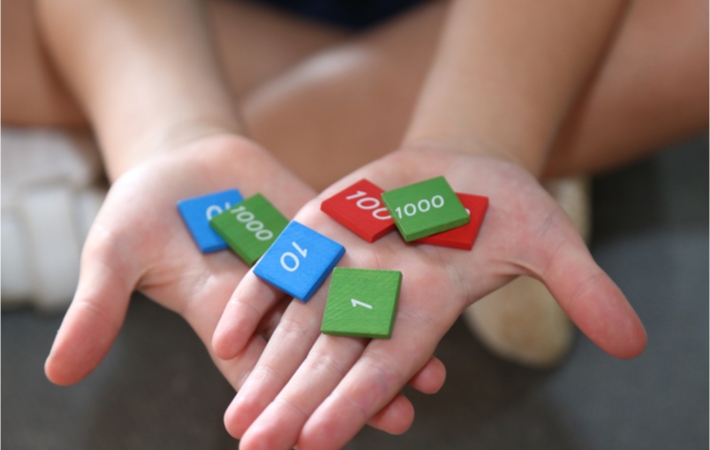 The Montessori Curriculum and Method is a revolutionary way of educating children. Developed by Dr. Maria Montessori, she based her child-centered education approach on scientific observation and study of a child’s development.

The curriculum includes carefully planned lessons sequenced logically to prepare the child for independent learning without undue pressure or frustration. Mathematics is an essential skill that plays a vital role in each child’s understanding of complex problems and making sense of the world outside the classroom.

Children between 0 and 6 have absorbent minds. During these years, in a Montessori classroom, they use materials to build and develop the skills needed to observe and interact with their surroundings to form patterns and sequences, find similarities, and see differences.

The Montessori method teaches math through hands-on learning and at the child’s pace. The Montessori math curriculum consists of different categories or groups, one of which is linear counting.

Let’s explore linear counting and how together with the other groups forms the foundation for solving mathematical equations.

The different categories in Montessori mathematics take a child on a journey from the most basic concepts to more difficult ones in math. It starts with recognizing numbers and forming quantities.

Here are the 6 categories of Montessori mathematics:

With linear counting, children become aware of numbers and the grouping of numbers. The process of counting includes numbers from 1 to 1000.

Boards, squaring chains, and cubing chains allow children to find patterns in counting and understand the hierarchy of numbers. It later prepares them for advanced mathematical concepts.

The introduction of decimals is before linear counting by using golden bead materials. Using the decimal system, children become familiar with the following categories—units, tens, hundreds, thousands, and relationships between them.

Once children learn numbers up to ten, a prerequisite to forming links between the non-symbolic and symbolic, linear counting begins using tens, teens boards, and beads. Learning the teens includes numbers 11 to 19.

In linear counting, number 11 presents with one ten + one unit. After which, the corresponding symbol is combined with the material to form an association. Linea counting continues until number 19.

Groups of ten present as ten, twenty, thirty, forty, fifty, sixty etc. Counting up to one hundred is taught by counting in tens. The number 44 presented with four tens + four units. In this way, linear counting helps children conceptualize numbers up to 1000.

After linear counting, where children can label a quantity with the correct numerical symbol, they progress to combining numbers and higher values. This next group includes using golden beads for larger numbers and introducing addition, subtraction, multiplication, and division.

The Montessori approach to math is visually manipulating numbers in different ways with materials and repetition so children can memorize basic facts. Once children have mastered these, they can apply the knowledge and work out problems in their heads.

Dr. Maria Montessori believed that the concept of math is easily understood by children, especially when presented in a logical, sensory, and systematic way. She deduced that the mathematical mind, coined by Blaise Pascal, a French mathematician, guides children to establish patterns and relationships in everything they discover.

Montessori math using materials grows a logical and orderly mind, concentration, memory, and attention to detail in children. If you are looking for an academically challenging Montessori curriculum for your child’s early education, inquire today to learn more about Mosaic Montessori.