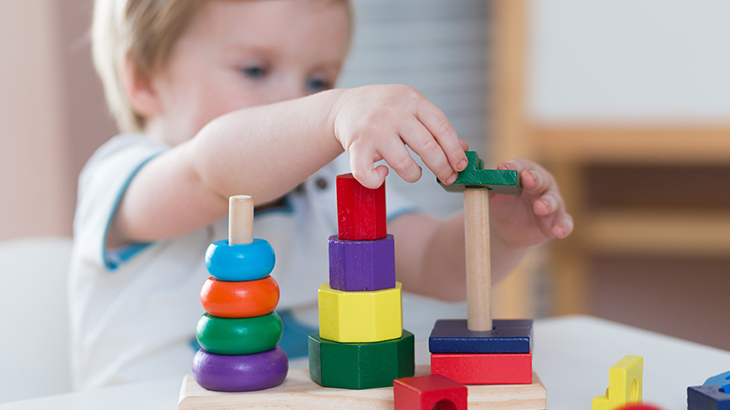 One of the most important decisions for any parent comes when their child is of the age to begin school. Which school to choose? Which programs will challenge their child appropriately without overloading them? Public or private? Home schooled? These, and many other, questions quite literally keep parents up at night. But what if there was another option? One that embraces a different method of education that is so far ahead of the curve, that other schools are just now starting to implement parts of what has been the core of Montessori for nearly a century.

So what is it about Montessori that makes it the optimal choice? Below are six reasons that most traditional public and private schools cannot compete against.

Imagine yourself back in the early 20th Century. The internet did not exist, cars were a new invention, and factories were the go-to workplace instead of the office. As more and more families became urbanized because of the need for factory workers, schools to educate their children also begun to appear to meet the need of education. However, public education was designed around producing viable factory workers, meaning that everything was done on rote and to a set schedule, and was delivered in the lecture style, expecting the student to memorize everything by just being talked to while sitting in lecture theaters.

Montessori, from the very beginning, integrated hands on learning, appropriate tools and classrooms for each age group, and one-on-one interaction with students. These “advances” in modern education originated with Montessori.

Montessori classrooms are centers of learning, not display

Walk into any primary school classroom in 2014, and one will see bright primary colours everywhere, standardized rows of desks, and students either completely disengaged from the learning experience or so overly energized that they cannot truly pay attention. These classrooms are filled with chaos and noise, and more often than not, a teacher will need to raise his or her voice to be heard over “the buzz.”

Contrast that to a Montessori classroom. Primary colours are relegated to teaching materials, while neutral colours dominate the classroom space. This draws the attention of the student to the material, instead of the space the material is held in. As well, Montessori classrooms encourage the student to learn where and how they are comfortable. Working at a table alone may work for one student, while another student may learn best sitting on the floor with a small group. Each student is given the choice of how and where they learn in the classroom, instilling responsibility and ownership, and subsequently pride, in their own education.

Testing as a learning tool

When one who has done the full public school journey thinks back, one of the most feared things during primary years were the tests that determined if you passed the grade or not. Silent, timed, high stress situations that expected the student to regurgitate months worth of rote memorization in the space of an hour. There was always the pressure of being compared to other students taking the same test at the same time.

Montessori is not afraid to test students, however the approach is different. The most distinct difference is that testing is done one at a time, instead of everyone testing at the same time. This is because, as explained before, the student is responsible for their own learning, which includes when and even how they test. As well, most testing is individualized, and, embracing the modern age, computerized so that the student can receive instant feedback from their teacher.

Every student is unique

While public schools will throw around terms such as “every child is an individual,” there is a disconnect when they place thirty to forty individuals in the same room and expect them to all learn at the same rate. This is where the Montessori program truly comes into its own. With Montessori, every child truly is an individual. Class sizes are kept manageable, and students are encouraged to learn at their own rate and, with guidance from their teacher, in their own way.

It is important to understand that Montessori methods are not “just for the gifted or prodigious student.” A Montessori student, realistically, learns mostly the same material that is taught in the public system. Where Montessori differentiates is in the delivery method, recognizing the individual uniqueness that each child has, and embracing it instead of attempting to make it conform to “the norm.”

The Montessori curriculum is well laid out and defined

While it is important to understand that every student in Montessori is unique, so are the teachers. To obtain Montessori certification, not only does the teacher bring with them any post-secondary education from a teacher with a Bachelors of Education, to a surgeon with a Medical Doctorate degree, they also are required to undergo two to three years of study and internship using many of the Montessori methods themselves.

It is because of this study and internship that Montessori teachers not only understand how the method works, but can help shape the curriculum to create maximum results for each individual student. While there is the constraint to meet public education standards and codes, almost everything about the Montessori curriculum is well laid out and explained. For example, take a “simple” lesson such as changing the printer paper in the classroom printer. In traditional classrooms, the whole class watches a video, listens to a short lecture, and then moves on. In Montessori, each student will study the material, watch a video if that is the delivery method, and then, crucially, will perform the action itself, in this case changing printer paper. This “real world” experience makes the study relevant, helps the student remember the steps to perform the action, and in most cases, makes it an enjoyable experience.

Montessori graduates are usually able to obtain post secondary entry, most of the time with scholarships as well. This is because while every Montessori student has to learn how to spell, has to memorize math, and needs to learn history, homework in Montessori is more often than not an extension of the classroom learning, instead of a rote set of problems and solutions to perform before the next school day. The Montessori method realizes that there is not enough time in a school day for most students to fully explore the learning they enjoy, and teachers will emphasize areas of study that the student will enjoy exploring. As well, crucial to the post secondary experience, Montessori students are assigned long term projects that are designed to teach collaboration with other students, research methods, and time management. These skills are directly translatable to term projects at the post secondary level, and beyond.